Mothership – LEO and the Graveyard

The setting for my Mothership campaign is based on Transhuman Space from SJ Games, with some tweaks to make it a more dystopian, care-worn future; dark and grimy.

One big change is that in my setting, Earth is isolated due to runaway ablation cascade – aka the Kessler Syndrome. This is a scenario in which the density of objects in Low Earth Orbit (LEO) is high enough that runaway collisions occur. The debris makes space activities and the use of satellites difficult for many generations.

The Graveyard is a nickname for LEO after the Pacific War of 2103 rendered it unusable. This halo of debris makes launches from the surface very dangerous and isolated Earth from space. The Graveyard contains valuable salvage – such as the dead remains of former space stations. 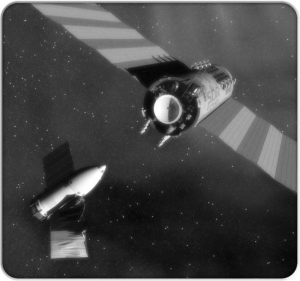 In my introductory Mothership session, the PCs started as the new crew of a private garbage scow working Vacuum Cleaner service in the Graveyard. Vacuum Cleaners bid on contracts to work a specific “patch” (a particular orbital trajectory) in LEO. In this case, their patch contained a single large object – an abandoned “six-pack” space station. It’s partially shredded from orbital debris and must be towed out for salvage.

Of course, not everything was as straightforward as they first appeared, and the PCs had to deal with complications aboard the “dead” space station. The kickoff session was meant as an introduction to the rules and setting, so was pretty light on horror. The next session will be a different story, though…

Gamer and 5th-level magic-user.
View all posts by K-Slacker →
This entry was posted in Campaign Setting, Mothership and tagged Kessler Syndrome, LEO, Mothership, Sci-Fi, The Graveyard. Bookmark the permalink.

1 Response to Mothership – LEO and the Graveyard