The Purple Planet as Underborea 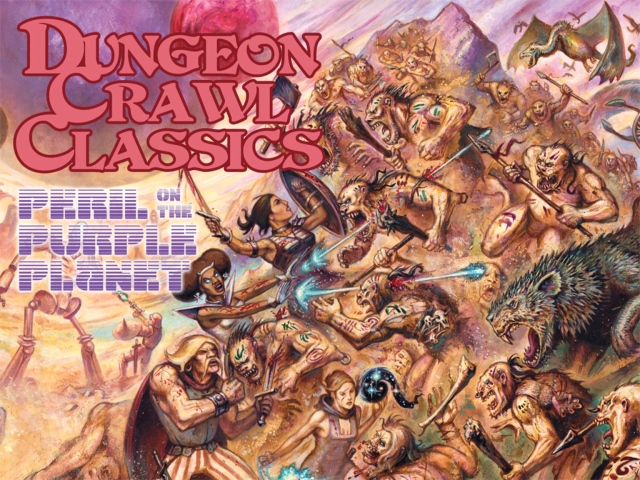 Peril on the Purple Planet is an excellent mini-campaign from Goodman Games. I got the boxed set as part of the Kickstarter, plus all the add-on modules (either in print or pdf).

I could run it pretty much as-is, as a distant world accessed via a portal or magical mishap.

However, I think that it could also be a good fit for Underborea. The Hyperborean Gazetteer describes Underborea thusly:

This is the mythic realm of legendry, a vast subterranean kingdom where dwell gods, dæmons, monsters, and otherworldly beings. Poets and madmen relate wild tales of vast cities populated by untold races. Although men of learning find wholesale acceptance of these claims troubling, they can agree that evidence supports the existence of subterranean societies of indeterminate origins, including the uncanny ghost-men called the oon.

For my Underborea, the entire plateau described in Purple Planet could instead be a vast subterranean cavern, illuminated dimly by the phosphorescent purple fungus that grows upon the cavern walls and ceiling. The plateau itself is about 300 miles by 200 miles, so it fits nicely beneath the Spiral Mountain Array.

I would probably skip the effects of the poison air here. Greenstones would correspond to green diamonds from the Ghost Ship of the Desert Dunes, which would have a similar “corrupting” role in play. (I actually like the “greenstone” name better than “green diamonds”; will probably refer to them as such in Desert Dunes.)

The Kith of the Purple Planet would of course be Vhuurmis in Underborea. Not much change required. (In fact, I’m likely to swipe a bunch from the “Ecology of the Kith” writeup for my Hyperborea.)

In Underborea, the Ascended Masters would be the remnants of Hyperborean noble houses. There’s an opportunity here too for PCs to find references to the “Lost Houses” in Khromarium and elsewhere, providing plot hooks for adventure.

The Skymasters of the Purple Planet don’t seem like a good fit for Underborea, but they’re sufficiently awesome that I would want to swipe them for the surface of Hyperborea. They would based out some aerie in the Spiral Mountain Array.

Since Underborea’s atmosphere is normal, the Bioshphere Plant (from Synthetic Swordsmen of the Purple Planet) won’t fit. Maybe it can be adapted to a facility atop Mount Vurmithadon which controls the Boreas?

(As an aside, these two modules also fit nicely with the Skyship from Desert Dunes – I can see an adventure path already.)

Some random thoughts that I don’t want to forget: